An awesome 4-5 matchup in D3 between Richmond and Montrose, teams that each put 10 wrestlers through to the state tournament.  They were in the same individual regional last weekend and there were some head-to-heads, with Richmond taking five of the seven bouts.  This will be the first meeting at Team State between the programs since the 2004 State Finals.  Since then, Richmond has been a mainstay, and Montrose is back for the third straight year.

With the dual starting at 130 pounds, look for the Rams to jump to an early lead as they run through a handful of weights they'll be favored at and that Richmond is younger and ultimately more inexperienced at.  Once they hit 160, though, Richmond will likely be favored at the next eight weight classes, which should be enough to propel them to a win regardless of what happens in the middle.

Freeland is back at Team State for the first time since 2004, while Alma's seniors made it four-for-four during their careers - the only trips in program history.  While Alma is still very much in position to make a run to the finals, they'll have to do so without starters Adam Garcia and #8 Cole O'Boyle, and without a 112 pounder.

There should be opportunities for Freeland to take a few matches in this one, but the Panthers have a little more balanced lineup and should be safe.  Look for some quality matches between Rosales-Fournier at 140 potentially and Munger-VanLoo at 160.  Another one to keep an eye on is Baltierra-Tomasek at 130.

The only matchup between conference foes takes place in this one as WMC squads Whitehall and Hart square off for the second time this year; Whitehall won 39-22 in the first meeting.  Hart was subject to some objectively unfavorable seeding and ended up at the 7 spot, but they're very much a contender to make a run.

From the last meeting, the Pirates made some adjustments, moving Vanderzwaag and Alvesteffer up a weight, and also get a boost from all-stater Trayce Tate at 119.  Whitehall has a distinct advantage in the upper weights and won every match but one from 152-285 last time out, a performance they'll hope to replicate today.

Some notable matchups will be Brown-Alvesteffer at 140, Cantu-Moore at 145, Haynes-Tanner at 160, and Guadarrama-Dowdell at 189.  Hart is seeking its first semi's appearance, while Whitehall is looking to make it 3 of 4 in the semi's dating back to 2018.

Dundee will get their first dual later in the day, as Constantine unfortunately pulled out after qualifying for the first time since 2012.  The Richmond-Montrose quarter could go either way but both will have an uphill battle when the winner takes on the Vikings.

The three-time defending champs bring eight number-one ranked wrestlers to the State Tournament and probably one of the best teams ever assembled in the division.  If it's Richmond, there's three potential 1 vs 2 matchups in Kluce-Kettel at 103, Chinavare-Keller at 119, and Buell-Peters at 189.  Should Montrose get through, they'll be in a spot to pick up some wins from #1's Bernard and Elasivich and Harber at 285.

Alma is a safe bet to make through, and it's likely that Whitehall is their opponent, but Hart does have a shot in the quarters, so we can take a look at both scenarios.  Alma wrestled Hart earlier in the year, taking home a 43-22 victory.

It's a similar story for Whitehall against Alma in that they'll have the advantage in the back half of the lineup.  However, the Panthers have Castillo and Munger favored up there, as well as a swing match at 189.  They could also, and may have to, throw #4 Rosales up to 140 to take on #2 Brown.

For the Alma vs Hart possibility, it's the middle weights that would decide it more than likely.  The two omitted wrestlers both picked up falls in the last outing - so for a 21-point margin, those are critical losses.  There would be some important matches at 103 and 119, and the flip for sure would come into play - for the 135/145/160 matches. 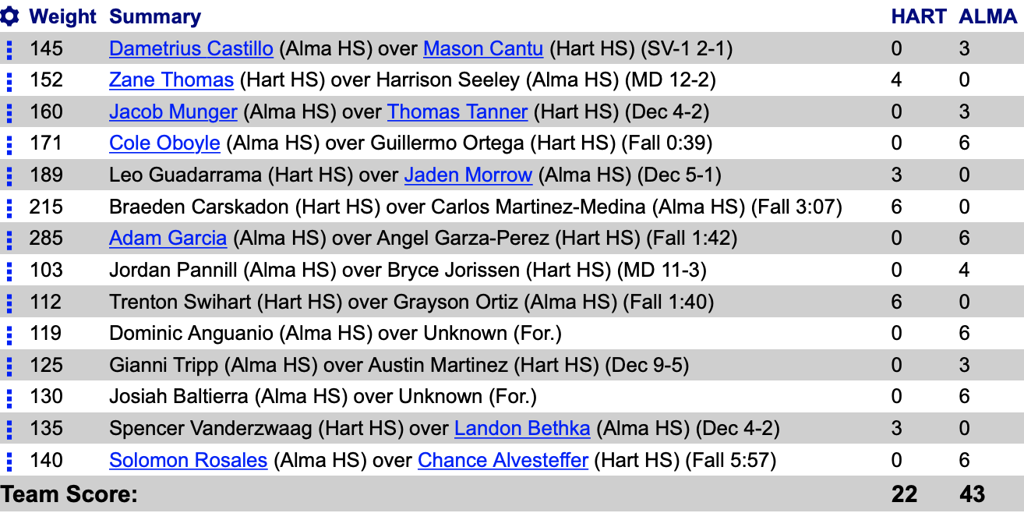 Meaning no disrespect, like D2, it'll be a coronation for Dundee tonight.  They should roll to a fourth consecutive title and cap off an incredible run for their senior class, led by Stoney Buell, who'll look to become the 3rd wrestler in state history to win four team and individual championships.

As Whitehall is projected to be the opponent on paper, a couple of matches stand out in that dual.  Most notably, 140 pounds could have #1 Fietz vs #2 Brown in a possible preview of later in the week.  Dundee could also elect to bump Buell to 215 to take on #1 Jenkins.  Outside of that, Whitehall could pick up a win or two elsewhere, but the Vikings in blue simply have too much.