Alright, so here's the situation: there's nothing to cover for the next month or so.  No tournaments, no previews, no recaps, nothing.  With that in mind, we're still going to pump out content.  Over the course of the next month, we'll countdown an all-time Top-50 Michigan wrestlers list.  Two per day, every day.  We'll also have some other content coming, and the Rundowns will return.  Needed to see what the situation was before we got rolling with anything.

Here's how the list was determined.  High school, college, and international careers were all taken into account.  The only real stipulations to make the list are you must be done with college, and we tried to narrow it down to the last 50 years.  So guys like Alex Facundo, Logan Massa, Myles Amine, etc... who are no-brainer picks won't be on this quite yet.  Is it a definitive list?  No.  Could've missed some people, may not be in the correct order, but it's mores an appreciation of all the great talent that has come out of Michigan over the years.   And at the very least, maybe it'll kill some time and help you get through the day.

Hall has left an imprint on virtually every level of the sport in Michigan, from his days as a high school and collegiate competitor to his legendary coaching career.

He prepped at Davison, where he won two state championships and was 4th twice.  Additionally, he was 4th and 2nd at the Junior Freestyle Nationals in 1987 and 1988, respectively, falling to future Olympian and UFC star Dan Henderson in the finals in '88.   Hall would also represent the USA at the Junior Worlds in Austria that summer, finishing 7th at 74 kg.  He was named to WrestlingUSA's Dream Team and was an Asics/Tiger 3rd Team All-American.

On the collegiate level, he qualified for the NCAA tournament all four years - three times for Michigan State, where he was a Team Captain, and once for Purdue.  He came within two matches of an All-American finish in three of those trips.  In 1990, he earned a Bronze at the Olympic Festival.

Hall made a seamless transition into the coaching world when he returned to Davison in the late-90s, where his alma mater had not won a state title since 1981.  From 2000-2006 the Cardinals were in the finals seven straight times, winning six state titles - including a Division 1/Class A-record five straight from '02-'06.  He lead Davison back to the finals in 2013, where they have been runner-up five times in the past eight years.  Hall was named NHSCA National Coach of the Year in 2005.

Below are two great videos from Flowrestling, taken from the 2008 NCAA Championships where four of Hall's former wrestlers (Donahoe, Metcalf, Reader, and Perry) had qualified.  No other high school in the nation had more than two qualifiers.  Also below, if you have not listened to it, is the podcast Coach Hall recorded with us two years ago, which is fantastic.

Credited as being the catalyst to the Davison dynasty of the early 2000s, the eldest Metcalf was a dominant force in Michigan and across the country.  He won two state titles and added a pair of 3rd-place finishes, compiling 223 career wins in the process.

Maybe his most notable performance, however, came in the 2002 Senior National Finals where he defeated Darrell Vasquez, who was the first-ever 4x State Champ in single-division California (match below). He would go on to be named to the WrestlingUSA Dream Team and was a Third Team All-American selection by Asics.  Metcalf also won the Junior Schalles Award, given annually to the nation's top high school pinner.

Metcalf competed for the University of Michigan but had a real knack for coaching and started a club that turned out many young stars who would go on to have remarkable careers, most notably Mark Hall. 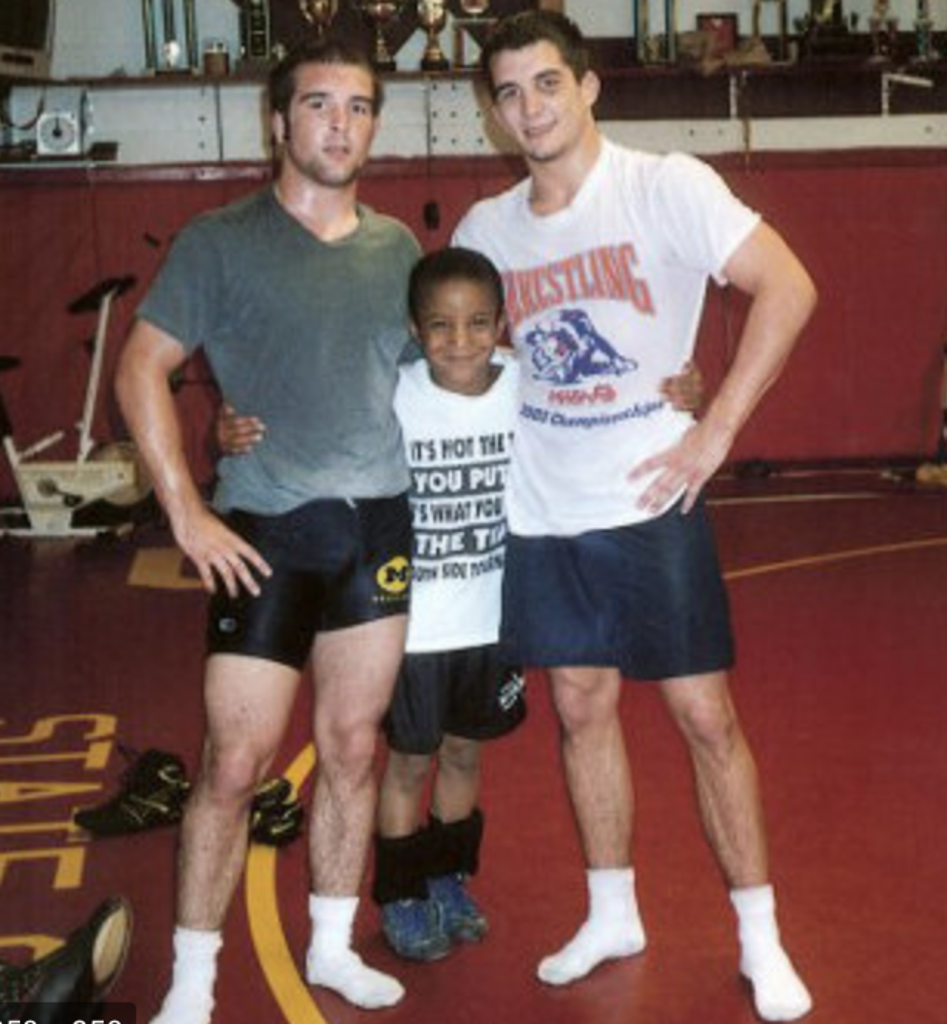