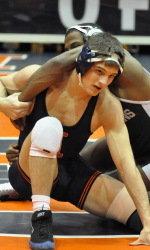 It’s always an exciting dual when the Chippewas and Mountain Hawks from Lehigh square off and this dual, those the score doesn’t reflect it, was no different.  #20 Corey Keener got CMU on the board first with a 7-3 victory.  At 133 perhaps the best matchup of the dual occurred, where Lehigh’s #4 Mason Beckman was able to squeak by #12 Joe Roth 2-1.  #17 Zach Horan took down a top-20 foe in Lehigh’s Laike Gardner 3-1 at 141.  From there, Lehigh won the next five matches, including one by fall that put the dual out of reach.  However, at 197, Madison Hts. Lamphere grad Jackson Lewis picked up a nice 3-1 victory over #29 John Bolich.

CMU’s second dual of the day proved to be a barnburner.  At 125, Keener jumped out to a lead on #7 Nathan Kraisser, a Round-of-12er from a year ago, and hung on for an 8-7 win.  He is 9-1 on the year now.  #17 Zach Horan lost a close one at 141 to returning NCAA All-American Evan Henderson at 141, 7-4.  Down 12-6 in the dual, redshirt freshman Nick Becker scored a 5-1 win over #18 John Michael Staudenmayer to get the Chippewas back in it.  With the dual on the line, Lewis and heavyweight Adam Robinson both earned decisions to give Central the big win over the Tar Heels.

The final match of the three-dual slate at the Northeast Duals came against an overmatched Sacred Heart team.  Central would win eight of ten matches over the Pioneers.  Gladstone grad Chad Deno got the dual started with a technical fall, followed up by a Tyler Keselring 7-2 decision.  Horan and Scott Mattingly both won to extend the lead to 13-0.  In the second half of the dual, the Chippewas would win four of five, three by bonus, to end the road trip with a resounding win.

One major decision proved to be the difference in this one, as the Spartans fell by a single point to the Lions.  After facing a 13-0 deficit after 149, #18 Ryan Watts knocked off #32 Markus Schiedel 7-4.  At 165, two Michigan natives squared off with Roseville alum Bobby Nash meeting up with Holly native and #23 ranked Josh Houldsworth.  Nash would shut Houldsworth out and go on to win 3-0.  The Spartan big men would all win from 184-285, but it was not enough as neither Rizqallah, McDiarmid, nor McClure could manage to earn bonus points and Columbia took the 16-15 win.

Dual two for MSU ended in similar fashion to their first dual.  This time it was Rutgers playing the spoiler role.  At 133, State’s Garth Yenter knocked off #15 Vinnie Dellefave, an NCAA qualifier, 5-2.  After bonus wins at 141 and 149, Rutgers also scored an upset of Watts at 157.  Then at 165, Nash kept the Spartans in the dual, picking up a huge first period fall over NCAA qualifier Nick Visicaro.  Once again needing bonus points up top, State fell just short.  Rizqallah won 2-0 and McDiarmid earned a 3-1 decision over #32 Hayden Hrymack to continue his hot streak.  Down five with one weight to go, McClure won over #15 Billy Smith 8-5, but Rutgers would hold their lead and take the dual.

Three duals, three exciting finishes.  The final dual of the day for the Spartans came down to the very last match once again, this time coming out the victor.  Facing a 16-0 deficit after four weights, Durand native Roger Wildmo stepped in at 157 and won 5-2, putting MSU on the board.  Bobby Nash gave them a boost once again at 165, this time defeating his THIRD national qualifier of the day, #18 John Michael Staudenmayer, via fall.  #20 Alex Utley won 7-3 over #30 Rizqallah at 184 to extend the Tar Heel lead to 19-12 with two weights remaining.  Pine River grad Luke Jones got the nod at 197 and picked up a 17-5 major decision to bring it within three.  At heavyweight, McClure sealed the dual for State by pinning DCC grad and true freshman Bob Coe in 2:28.

Paul Hancock (Army/Dearborn Fordson): Split his matches at the Grapple at the Garden, picking up a major decision over Hofstra and falling 5-3 to Princeton.

Josh Houldsworth (Columbia/Holly): Posted a 2-1 record at the Northeast Duals.  Fell to Nash 3-0, then rebounded to win 5-1 over Clarion and by fall in 2:24 over Lehigh.

Jackson Morse (Illinois/Lowell): Spotless 4-0 record over the weekend, going 2-0 at both the Northeast Duals and Grapple at the Garden.  Pinned Matt Stull of George Mason and #30 Nijel Jones of NC State at the NE Duals.  Majored #5 Josh Veltre of Bloomsburg 11-0 and won 8-4 over #22 Dylan Palacio of Cornell at the Garden.  He is now 12-0 with 11 bonus point victories on the year.

Tim Lambert (Nebraska/Forest Hills Eastern): Went a perfect 3-0 at the Stanford duals, most notably knocking off #13 Evan Silver of Stanford 6-1.

Bob Coe (North Carolina/DCC): Tough weekend at the Northeast Duals, as he was unable to post a victory in three dual meets.

Ken Bade (Pennsylvania/DCC): Won 6-4 over #32 ranked NCAA qualifier Dane Harlowe of Boston, then fell to Bloomsburg’s #20 Nick Wilcox 6-0 at the Grapple at the Garden.

IN THE RANKINGS (via WrestlingReport.com)