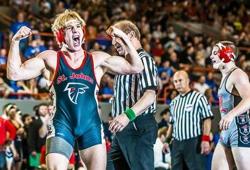 Best Case Scenario – All the chips fall into place in regard to the lineup, Colegrove returns from injury without missing a beat, and the Red Arrows prove to be a consensus top-25 team in the country, sending off Head Coach Dave Dean with his 2nd title after dethroning bitter rival St. Johns to avenge 3 consecutive season-ending seasons.

Worst Case Scenario – The upper and lowerweights both get jammed up, last year’s underclassmen don’t progress as expected, and once again the Red Arrows find themselves unable to match St. John’s firepower, losing by a surprisingly wide margin in the finals.

Best Case Scenario – Any doubts about the Red Wing’s ability to overcome the 10 titles and 21 all-state medals lost to graduation are erased when new faces emerge to fill the gaps, their studs are pinning machines, and the team once again knocks off Lowell to earn a 5th consecutive state title along with a top-25 national ranking.

Worst Case Scenario – Despite having the most nationally ranked wrestlers of any team in the state, the Red Wings gaps prove too much to overcome, and their 4-year title streak ends in disappointing fashion when they lose soundly to rival Lowell in the finals.

Best Case Scenario – For yet another season the Abes take a big step forward, establish themselves as D2’s clear-cut #3, and take a nationally ranked St. Johns or Lowell team down to the wire in the semis, setting the stage for a state title run in 2014-2015.

Worst Case Scenario – Feeling the pressure of elevated expectations, few Abes are able to improve from last year, and they make it to BC as an #7/8-seed before losing a lopsided QF dual to St. Johns/Lowell.

Best Case Scenario – The young Lancers arrive a year ahead of schedule, getting big contributions from several new additions to lineup, and ultimately making a return to BC where they bow out in a competitive semifinal dual with Lowell or St. Johns.

Best Case Scenario – In what proves to be a breakout season, the Blue Devil’s young newcomers spur them to a regional title and decisive QF win in BC.

Worst Case Scenario – Hampered by a logjam down low, Gaylord’s season ends in a disappointment when they are beat by Greenville or Bay City Western at team regionals.

Best Case Scenario – The Vikings prove to be one of Michigan’s deepest programs, pulling from within to account for 6 valuable graduation departures, and ultimately match last year’s regional title and subsequent semifinals appearance.

Worst Case Scenario – Despite a strong freshmen class, this Vikings find themselves in a bit of a transition year, and are outgunned by a reinvigorated Lakeshore team at districts.

Best Case Scenario – A strong class of newcomers emerge to compliment 3 returning SP’s + 2 SQ’s, vaulting the Warriors all the way to a #3-seed and competitive semifinal showing in BC.

Worst Case Scenario – Several returners fail to build on breakout seasons in 12/13, the middle of the lineup becomes too jammed, and either Gaylord or Greenville takes advantage to end the Warrior’s season at regionals.

Best Case Scenario – The Yellow Jackets lineup once again proves to be among D2’s most balanced, and that is the difference as they knock off Gaylord or BC Western en route to their 5th consecutive regional title, followed by their 3rd semifinals appearance in the aforementioned span.

Worst Case Scenario – Unlike most years, few step up to fill the Yellow Jacket’s graduation losses, and the firepower of Gaylord and/or BC Western proves too much to overcome.

Best Case Scenario – All 3 state placers return as bonafide state title contenders, and, thanks to some key patchwork in the middle of the lineup, the Indians find a way to reach their 3rd semifinal in 4 years.

Worst Case Scenario – The Indians struggle mightily to fit the pieces back together after a chaotic offseason, and it costs them a 4th consecutive regional title when they are upset by New Boston Huron or Mason.

Best Case Scenario – The Blackhawk’s manage to fill the majority of their gaps, their studs make a big jump to power them through a relatively favorable district/regional, and team proves they belong in BC with a competitive showing.

Worst Case Scenario – Their returners show little progress, and all season the Blackhawks are unable to limit bonus points, opening the door for Holly to upset them at districts.

RT @JustinFeldkamp: Watch the remarkable story of Connor Bartlett. He had stage 4 cancer and at one point, depending on how things played o…