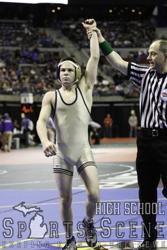 Analysis – There’s a good chance Parker is up at 112 this early in the season, but if not he should absolutely run through this weight. Otherwise, Gowens is the clear favorite, but Wieczorek is a hammer freshman that could surpise. The other 3 should be solid as well, but at this point there’s little evidence that they could finish any higher than 3rd assuming these weights hold.

Analysis – Pretty deep field that a number of guys could win. There’s a decent shot this chart ends up featuring a 2014 state placer from all 4 divisions. No way to pinpoint a favorite as of now unless Parker is up a weight, but I like Bennett just a little bit more than anyone else.

Analysis – This one should be all Bertucci. Jendritz and Blevins are tough kids that will make him wrestle, but Cam has been in and out of the national rankings for over a year and should have little trouble taking care of business. Renicker is another to keep an eye on. He came out of now where at the end of last season to place in D1, so it will be interesting to see how he fares up a couple of weights.

Analysis – With Ward out due to injury, it will be Busing v. the field a here. I wouldn’t say an upset it is totally out of the question, especially this early in the season, but it would be quite a surprise to see any of the listed guys knock off the 2X all-stater.

Analysis – No doubt that Yates is a stud and should be nearly untouchable here, but I’m actually more interested in the freshman: Dente & Sterling. Both have the potential to be among this year’s best, and I’d be fascinated to see how they compete against a defending state champ.

Analysis – One of the more interesting weights, this one features a pair of frontrunners who have some recent history. Roesly, formerly of Newaygo, had an awesome GFC that included a 10-6 win over O’Connor in the 7th place bout. Assuming he is eligible to wrestle immediately, they seem likely to meet in the finals. They will need to be on their game early though, as there is plenty of depth behind them with 2 SQ’s and 4 RQ’s also projected.

Analysis – Now here is a weight that should be lots of fun. With Zac Hall up at 145 for opening weekend, 3 State Placers and an SQ are left to fight it out. Lakeshore’s lineup will likely result in top-ranked Hanau being up a weight for most of the season, and he won’t have to wait long for his first big test. Rees is a top-5 sophomore who had a strong summer, and in my opinion is the favorite. Seasoned vets Waddell and Scholl aren’t too far behind, and their presence should make for some very strong semifinal matchups.

Analysis – Fans won’t have to wait long to see the first battle of defending champs this season! With Bozzo out this weekend, Hall moves up to 145 where he will likely see Rojem. It wasn’t a great preseason for Rojem, but he’s always been a guy who steps it up a notch in-season, so I’m not too concerned. That being said, with all due respect, Hall is on a whole different level. Rojem may be able to use his size and mat skills to slow Hall down and keep the score close, but I see no way that Hall loses this match. In fact, I’ll go ahead right now and say that Cole Weaver is the only kid currently ranked at 140 or 145 with a chance to take out Hall this season.

Analysis – As of last month Massa is ranked as the state’s top wrestler at any weight class, and Saturday’s results will reflect it. I’m high on some others in the field here, especially Siersema, but truth be told the only way anyone gets to the 3rd period is if Massa wants them to. He is just that dominant.

Analysis – Juarez is 1 of 5 Power 15 #1’s expected to compete on Saturday. For the record, that means that of the state’s top wrestler at each weight, a staggering 36% will be in attendance! Anyways, like the other top dogs, Juarez should take care of business without too much trouble. He’s not the type who usually wins by wide margins, but I doubt he’s ever in serious trouble. As for the rest of the field, Workman and Wixson are clearly the top contenders, and I’d expect them to meet in an intriguing semifinal opposite Juarez on the bracket.

Analysis – Not the deepest of fields, but as is usually the case with upperweights, it won’t take long for some previously unknown upperclassmen to establish themselves this season. For Saturday, Thompson and Brish are clearly the guys to beat, and, assuming the weights hold, it would be a shock if they don’t meet in the finals. I’m going with Thompson, but neither have competed much all offseason, so I really have no idea what to expect.

Analysis – I’m not sure whether we will see Arthur or Wildmo at 189 for St. Johns, but either way, with state champ Teddy Warren sidelined due to injury, it’s safe to expect that one will end the day on top of the podium. Graham is a very solid kid that could challenge for a D4 title this year, but I don’t see him being able to matchup with kids that are among the country’s top upperweights quite yet.

Predicted Finish – Just like at 189, whether it be a Wildmo or Arthur, a nationally ranked St. Johns wrestler should dominate this weight. The rest of the field is quite balanced, and I would not be remotely shocked to see any of the other 4 listed wrestlers opposite Arthur/Wildmo in the finals.

Predicted – Not too many established big guys in this field, but heavyweight is always the hardest to gauge preseason. Conkle is an enormous kid, and I think he has the potential to take a big leap forward this season after coming within a match of placing as a sophomore.