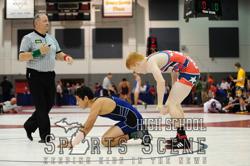 Justin Oliver and Myles Amine at the GFC

It took them over 3 years and 5 duals meets to do it, but on Wednesday afternoon their hard work finally paid off as Davison’s senior class got their first win over Detroit Catholic Central by a score 31-28.

It was sweet revenge for the entire Cardinals program, which lost a heartbreaker to DCC by a score of 29-26 in last year’s state final. Even better, Davison managed to win on enemy turf, as well over 1000 raucous DCC students packed the stands for their annual assembly dual.

As always it was a team effort, but in my mind 3 matches in particular made the difference in the dual.

#1 160 – Much to the crowd’s delight, highly touted DCC freshman Tyler Morland scored an immediate takedown to jump out to a 2-0 lead on 2X Davison state placer Tomas Garty. He quickly threw in a leg and went to work on a guillotine; dominating the 1st period and appearing to be on his way to a win. However, the more seasoned Garty managed to withstand the early barrage, and, thanks to some timely reversals, controlled the latter stages of the match to win by a convincing margin.


189 – In a rematch of last year’s 160lbs state finals, 2X Davison state champ Jordan Cooks won his 3rd consecutive meeting against DCC state champ Logan Marcicki. Neither wrestler was able to find much offense, but Cooks managed to score the match’s only takedown with a slick 2nd period single leg. He followed up with a critical ride out to end the period, and that proved to be the difference in what would eventually be a 4-2 win.

#3 140 – With 3 matches to go, the writing was on the wall. Davison led by 7, but with #1-ranked Shamrocks at both 145 and 152, it was clear that whichever squad got the W here was in the driver’s seat. Fittingly, this also happened to be one of the dual’s most notable individual matchups. 2X state champ Justin Oliver took the mat for the Cards against Myles Amine of DCC. The pair had met on 3 prior occasions, with Oliver winning by scores of 5-3 (OT) at 2013 team state, 5-3 (OT) again at the GFC, and finally 8-5 at Super 32. This time proved no different, as Oliver once again emerged victorious in an action packed match. In the 1st period Amine found himself in position to score off a single leg, but a counter and subsequent ride out gave Oliver a 2-0 lead heading into the 2nd. A quick escape then pushed Oliver’s lead to 3-0, and he once again fended off a deep single to keep Amine scoreless through 4 minutes. However, It didn’t take much longer for Amine to get on the board, and the Shamrock crowd erupted when he reversed Oliver to his back to start the 3rd. However, Oliver managed to belly out in time to avoid giving up nearfall, and shortly later returned the favor, reversing Amine to his back and scoring 2 nearfall points of his own. Oliver went on to ride Amine for the remainder of the match, winning by a final score 7-2 to give his team a 10 point lead with only 2 matches remaining.

Davison 4x state champ @AlexFacundo20 secured a spot on the U20 Freestyle World Team with back to back tech falls i… https://t.co/3DtG5ixDyy