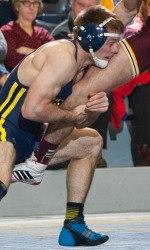 ANN ARBOR, Mich. -- The No. 19-ranked University of Michigan wrestling team used pins and a strong finish, winning six of the final seven matches, to cruise to a decisive 30-9 win over intrastate rival Central Michigan on Sunday afternoon (Dec. 15) at Cliff Keen Arena.

Grajales kickstarted the Wolverines' surge after CMU evened the dual score with back-to-back decisions from a pair of nationally-ranked lowerweights. Grajales, ranked seventh in the latest InterMat poll, put up several early points against Scott Mattingly, scoring off a front headlock and tilting the Chippewa for two before locking up a nearside cradle and collecting the pin at the 2:51 mark. It was his third fall of the season.

Senior/junior Jake Salazar (Midway, Utah/Wasatch HS) earned his first win of the season with a 4-2 SV decision over Lucas Smith in the subsequent bout at 157 pounds, giving U-M a solid nine-point advantage at the intermission break. With Smith leading 1-0 after two periods, Salazar choose a neutral start and went on the attack, scoring on a double leg midway through the period. Smith escaped to force overtime, where Salazar converted on another blast double to end the bout.

The teams traded the first two matches after the break. Fifth-year senior Dan Yates (Hesperia, Mich./Hesperia HS), ranked eighth nationally, rallied from an early deficit to beat Nick Becker, 6-2, scoring a takedown on a second-period cradle out of the circle before adding two stall points and 2:35 riding-time advantage in the third. CMU earned its final victory of the dual with a decision from 11th-ranked Mike Ottinger at 174 pounds.

Abouander ended his varsity debut at 184 pounds early, pinning Craig Kelliher in a leg turk at the 3:43 mark. The Wolverine rookie finished hard on a single-leg attack -- and accumulated 1:12 time advantage -- in the first period before starting on top in the second. When Kelliher tried to switch early in the frame, Abounader got a leg turk in, earning a five count before collecting the fall.

Michigan ended the dual with back-to-back decision wins at 197 pounds and heavyweight. Senior/junior Chris Heald(West Bloomfield, Mich./West Bloomfield HS) defeated Jackson Lewis, 6-5, in the former, scoring takedowns in the first and third periods. He gave up a late takedown but escaped immediately to preserve his one-point victory.

Freshman Adam Coon (Fowlerville, Mich./Fowlerville HS), ranked fourth nationally, capped the dual with a 9-2 decision over Adam Robinson at heavyweight, improving his record to a perfect 14-0 on the season. The Wolverine freshman used a single leg to take Robinson to his back for four points early in the first period, tilted him for two early in third and earned a pair of stall points.

The Wolverines (3-2) will take a break for the holidays before returning to tournament competition at the 51st annual Midlands Championships, scheduled for Sunday and Monday, Dec. 29-30, in Evanston, Ill. Hosted by Northwestern, the tournament's first session is slated for 9:30 a.m. CST at Welsh-Ryan Arena.