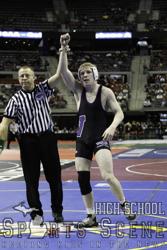 This is a pretty light field as far as established talent goes. Robinson was unable to break the lineup at Whitehall last year, but now it’s his time to shine and he has not disappointed. I think he’s the guy that gets it done tomorrow, but I would not be too surprised to see Sanchez, Mandell or Janes finish on top of the podium either.

This weight is jam-packed with studs, but I’m not too sure any of them can beat Parker. Of the field, Gonser poses the biggest threat, and Richardson is another who I think carries some upset potential.

Another stacked field, this one should be a bit more open for the taking. Of the 7 ranked wrestlers projected to be here, McFarland is the only one I’d have a hard time envisioning as the champ. In the end I think Brown will live up to his ranking, but I also foresee Blevins having a big day. He really impressed in EK earlier this month, and I think he picks up 1 or 2 marginal upsets en route to a finals appearance.

In what could be the day’s biggest matchup, this chart will likely pit Fenner and Yates against each other in a D3 vs D4 state champ final. In my eyes it’s pretty much a toss up right now, and whoever wins will set the tone for the rest of their season. I’m also a believer that Ellis may just be able to pull an upset against one of the champs. He’s a riding a somewhat disappointing loss to Leija from a week ago, but I think he bounces back in his home gym.

Abdellatif and O’Connor should make for a great finals match. Both are top-75 seniors who are strong state title contenders within their respective division. O’Connor has been pretty consistent in the past, but he looked absolutely phenomenal when I watched him in EK on opening weekend. I say that tomorrow is one of his “on” days, and he

There are plenty of solid guys present here, but not the same star power as most of the other middle weight classes. Roesly had an awesome GFC this fall and is the clear favorite. Cooper, the younger brother of state champ Jake, is a tough freshman that may have a chance to break out with a high finish.

Plenty of talent present here, but no way, no how, does anyone stop Hall from winning his 4th TOC title. Zac has absolutely ran through this tournament the past 3 years, and as good as Siersema and some of the others are, I do not see any way that pattern changes.

State champ Rojem is an absolute hammer whose senior season got off on the wrong note when he lost to Zac Hall by TF on opening weekend. Combine that with a somewhat disappointing GFC, and right now he’s sort of flying under the radar. I say Rojem comes out like gangbusters and has a signature tournament on Saturday, winning handily against Bozzo in the finals.

Just like at 140, there are plenty of talented kids here, and guys like Franklin are in the top 1% of 152lbrs in the state. However, simply put, I just don’t see any way that Massa is challenged too heavily. Any match of his going for a full 6 minutes would be quite a surprise.

The imminent finals matchup between Ritchie and Elliott is my most anticipated bout of the day. I’m not quite as familiar with Elliott, but Ritchie is an absolute offensive machine that isn’t afraid to put points on the board. Both will get tested in the semis, and from there I foresee Ritchie winning an action-packed finals match by at least 3 points.

It will be interesting to see how this weight plays out, as I’m not sure either Cooper or Thompson has wrestled 171 yet this season. If there here, I think they are good bets to meet in the finals. Litz is a stud as well, but comes in off a week in which he took a pair of somewhat disappointing losses.

Another mega-matchup, I think Hillman is going to take Arthur down to the wire on Saturday. He’s still pretty unknown nationally, but Hillman is 100% the real deal. He had an absolutely fantastic preseason, and then kicked off his final HS season with a dominant win over defending D1 state champ Shwan Shadaia. Ultimately I just don’t have it in me to pick against Angus, but make no mistake, this is a match Hillman can win.

This should be an interesting one. Wildmo is far and away the most established, but he is giving up a bit of size at 215, and this is a deep weight class with big, physical upperclassmen. In the end I think Wildmo’s motor will be a bit too much to overcome, but I expect him to be tested early and often come Saturday.

Wow. Talk about a drop off. It’s amazing how the chips can fall, and somehow this weight winds up with no ranked wrestlers and only one RQ. To be honest, Sturgis is the only one I have seen in person, so he’s my pick.

RT @alliseeisgold: Our biggest fundraiser each year serves to give back to a wrestling club in the same city as the NCAA Championships. Tha…