Counting down the best moments and performances from the past year. 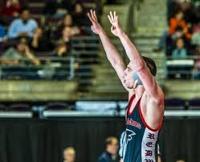 2013 was a memorable year for Michigan wrestling, so we had to compile a list of the 13 Top Moments.  Take a look below and re-live a great year in the greatest sport.

St. Johns’ Zac Hall got an opportunity to display his talents to the nation in Flowrestling’s first-ever “Who’s #1” dual meet.  Top wrestlers from across the country met to decide who was truly the best at their respective weight classes.  132 lbs. featured four wrestlers who would compete in a winner-take-all single elimination bracket.  Hall met PA’s Michael Kemerer in the first round and fell just short in a controversial match.  Nevertheless, he put Michigan wrestling on display as the state’s lone representative and put on a great show.

Watch Hall vs. Kemerer at Who's #1

A star-studded lineup headed west to Oklahoma City, OK in late June to wrestle at the USA Wrestling Junior Duals.  In both styles the team fell just short to Illinois, who has won the last several national titles.  An action-packed freestyle final could have ended differently, had Logan Massa not suffered an injury in a closely contested match against top-ranked Bryce Brill.  The Junior team set a great standard for the teams to follow, and hopefully the Juniors can break through and bring home a title in the near future.

Sophomore Nate Limmex of GRCC, virtually unknown on the national scene at the time, put on a dominating display at Flonationals.  Limmex, who missed most of the high school season due to transfer rules after moving from Lowell, powered through the bracket after entering the tournament seeded 13th.  What makes Limmex’s run even more impressive is that he didn’t surrender an offensive point until his finals match, when he gave up a takedown with five seconds left with the bout well in his favor.

After placing 4th in 2012, junior Logan Massa headed to Greensboro, NC with the sole intention of bringing home a belt.  Fresh off a GFC title, his first competition off of injury, he was not tested until his final bout.  That match saw him win 4-3 over Duke-bound Grant Leeth of Missouri.  He will be back to defend his title next year as he tries to out-do his brother, Taylor, and become a 2x champion.

One of the toughest in-season collegiate tournaments took place in Las Vegas in November.  Freshmen Adam Coon and Gabe Dean entered the tournament seeded 8th and 5th, respectively.  Yet when the event was finished, both had won championships.  Coon knocked off #3 ranked Nick Gwiazdowski in OT in the quarters and then added another OT win over #5 JT Felix in the finals.  Dean, meanwhile, defeated #5 Jake Swartz in the semifinals and then dominated TJ Dudley of Nebraska in the championship match.  Both wrestlers are now ranked in the top  6 in the collegiate ranks and have their college careers off to incredible starts.

The FILA Junior tournament is tough for any college athlete to win, let alone someone still in high school.  While Ben Whitford isn’t your typical high school senior, he still had an amazing performance en route to a championship.  Some of his notable wins included Mark Grey of Cornell, Mason Beckman of Lehigh, and Jimmy Gulibon.  Just to give you some perspective, those wrestlers are now ranked 14th, 4th, and 18th, respectively, at the COLLEGE level.  Impressive doesn’t even begin to describe Whitford’s tournament.

Only seven Michigan natives have ever earned the distinction of 4-time NCAA All American.  In March, Rockford alum and CMU senior Ben Bennett joined the club.  Two weeks after winning his fourth MAC Championship, an incredible feat in its own right, Bennett advanced to the NCAA Semi-finals, where he fell just short to rival Robert Hamlin of Lehigh.  Bennett would bounce back to place fourth in the tournament and further cemented his place in Michigan wrestling lore.

After falling to Jordan Oliver in the semis of the US Open, Brent Metcalf stormed back to win the World Team Trials and earn a spot in the World Championships.  Metcalf put on an absolute show, avenging his loss to Oliver in the mini tournament in a heated bout, and then handling Kellen Russell in two straight matches.  It was Metcalf’s second World Team appearance.

In the days leading up to the GFC, Mark Hall and Jordan Cooks engaged in a friendly(?) debate via Twitter over who would win should the two ever wrestle.  The exchange prompted to Hall to jump up to 171 to challenge Cooks in a match fans were anxious to see.  However, Fox Baldwin (FL) and Alex Marinelli (OH) chose to bump up to 171 to try and take out Hall as well.  Unfortunately, Hall and Cooks never met, as Baldwin defeated Cooks in an entertaining double-OT semifinal match.  Hall would go on to win his third GFC title with a nice win over Baldwin in the finals.

Fans were treated to an incredible event December 21 inside Perani Ice Arena in Flint as Agon II took place.  Being such a rare occurrence, having a professional wrestling event taking place in Michigan, it was awesome to see the fans come out and support #TheRevolution as well as some of Michigan’s finest athletes ever to step on a wrestling mat.  Among the highlights were: a match which 31 points were scored, the return of Andy Simmons to face Kellen Russell, a rematch of two four-time All Americans (Bennett/Simaz), and Metcalf putting on a dominating show in front of his hometown fans.  Well done, Agon.  Well done, indeed.

3. Coon Doubles Up at Fargo…Again

Adam Coon entered the Greco-Roman nationals with revenge on his mind, as he had taken an earlier loss to Sam Stoll of Minnesota.  This time would be much different, as Coon tech-falled Stoll in the first period.  He then stormed through the freestyle bracket as well, teching Nathan Butler of Kansas in the finals in under 30 seconds.  That win gave Coon another USA Wrestling Triple Crown and preserved his legend as one of the greatest Freestyle/Greco-Roman prep wrestlers of all time.

It wasn’t much of a surprise that Whitford and Coon were hardly tested throughout their senior seasons, as both dominated every opponent they faced.  Becoming a four-time state champion is an unbelievable feat that both earned in 2013.  Coon won by fall in the first period, Whitford by tech fall early in the third, and both were treated to a standing ovation from the Palace.

As if it could be any other moment.  Evan Toth’s “Hail Mary Headlock” stunned the entire arena of fans, including his own teammates and coaches, as he pulled off one of the most incredible wins in Team State history.  Down by seven heading into the third period, Toth dug an underhook and hit Davison’s Derek Humphrey in a headlock.  Humphrey did everything possible to fight it off, but with about 30 seconds left in the match, Toth got the fall, CC got the title, and Coach Krause got flung across the mat by Coach Hancock, as Catholic Central went absolutely berserk.  It will truly go down as one of the most incredible moments in Michigan wrestling history.

So there you have it- our Top Moments of 2013.  Did we get it right?  Comment below and let us know what we missed.