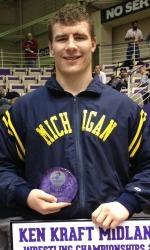 Coon, seeded third, knocked off Iowa's top-seeded -- and third-ranked -- Bobby Telford, 3-2, on an incredible third-period takedown. The Wolverine wrestler shot in on a double leg late in the frame, but Telford countered, locking up a tight cradle. After several precarious moments, Coon ducked under, coming around top to score. Telford escaped to narrow the score but could not get off a quality shot.

Coon also scored while locked in a cradle in the semifinals, where he defeated Maryland's second-seeded Spencer Myers, 4-1. The Wolverine freshman improved to 19-0 in his collegiate career. It is the best start for a Michigan true freshman in program history.

Fifth-year senior Eric Grajales (Brandon, Fla./Brandon HS) lost a 5-4 overtime heartbreaker to Lehigh's sixth-seeded Mitch Minotti, giving up a low single leg in the waning seconds of the first tiebreaker. Grajales, seeded fifth, struck first with a first-period cradle, but ran out of mat room to turn Minotti. The Mountain Hawk wrestler evened it up with a takedown late in the second before Grajales escaped to even the score. Grajales rode out the first 30-second frame and escaped quickly in the second to have the match in hand before the winning Minotti takedown.

Grajales knocked off Northwestern's top-seeded Jason Tsirtsis, 6-3, in the semifinal round, rallying from an early first-period deficit with an arm drag and two-point tilt in the second. He added an escape in the third and just missed on a riding-time point, ending the match with 56 seconds time advantage.

Massa sacrificed an early lead in a 4-3 semifinal loss to Iowa's second-seeded Nick Moore. The Wolverine put Moore on his back out of a late scramble in the first but settled only for the takedown. The wrestlers traded escapes in the second and third before Massa was called for a second stall warning and Moore finished on a single leg in the waning seconds to steal the match.

Boyle went 3-1 on the day, earning extra points with a pair of bonus victories, to register his first Midlands placing performance. He opened the day with back-to-back wrestleback wins, including a dominant 9-0 major decision over Brown's Billy Watterson -- on two takedowns, a three-point tilt and 3:03 riding time -- in his first morning match, before falling to Illinois' defending NCAA champion Jesse Delgado in the consolation semifinals. He accepted a forfeit victory in the fifth-place match.

Youtsey and Bruno both opened the day with falls to secure placing performances before dropping consecutive matches to similarly settle for eighth place. Youtsey pinned Maryland's Billy Rappo, using a head-and-arm to reverse the Terrapin to his back at 3:31. Bruno stuck Rider's Chuck Zeisloft out of a wild scramble late in the first period, initiating the flurry with a single-leg shot before putting Zeisloft on his back at 2:57.

Senior/junior Collin Zeerip (Fremont, Mich./Hesperia HS) and freshman Domenic Abounader (Gates Mills, Ohio/St. Edward HS) were eliminated one match shy of placing at 174 and 184 pounds, respectively, after dropping their morning wrestleback matches. Abounader was beating North Dakota State's 12th-seeded Kurt Julson, 3-0 with riding time, midway through the second period when he was headlocked and pinned at 4:15.

The Wolverines will resume dual-meet competition on Sunday (Jan. 5), hosting Maryland at 2 p.m. at Cliff Keen Arena. The Terrapins, who will join the Big Ten Conference next season, took sixth place at Midlands.