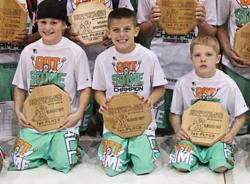 The MYWAY Season got officially rocking and rolling last weekend with the annual Spartan Country Tournament, which traditionally gives a slight preview of what is to come for the MYWAY Season.

This year's Spartan Country was down a little due to the storm of the century that hit most of Michigan and the Midwest last weekend, however, many of Michigan's biggest name youth studs still made the trip to Battle Creek.

Among the biggest individual matchups of the day was in the 02-01 70lb bracket where reigning MIG Youth Wrestler of The Year Dominick Lomazzo won 1-0 over 2011 Wrestler Of  The Year Andrew Hughes.  Lomazzo also won 6-0 over 2013 All-Future Teamer Riley Bettich and Hughes scored a 7-2 win over Bettich, who finished 3rd in the stacked weight class.

Dundee was on display in full-force as their three All-Future Team Members and GFC Champions - Lomazzo, Austin Fietz, and Braeden Davis, were among 6 individual champions from the club.

The Spartan Country was a Fab 50 event, and we have more Fab 50 events coming almost every week from now until the MYWAY State Tournament, so be sure to keep checking the schedule.

Next weekend, the Fab 50 goes across state lines with the Great Lakes Championships in Fort Wayne, IN.  For those choosing to stay in Michigan this weekend, MYWAY is offering a full docket of events in each region.  Check the list below for MYWAY's schedule this weekend.

The Fab 50 Standings will be posted sometime this month, so check back to see where you stand!