Alma vs Olivet - will 3rd time be another classic? 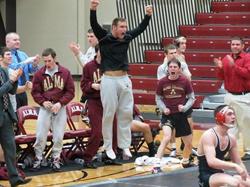 There is one certainty in the wrestling program at Alma College. It was a certainty even when the program was around in the 1970s and 1980s. The dual with Olivet College is always a special week. Olivet College began a streak of dominance in MIAA and NCAA Midwest Regional wrestling circles during the 1970s that has continued until today – albeit for one Scottish interruption. In 1981, as Olivet looked to continue its dominance by chasing a 10th straight MIAA title, it was the Alma College Scots who dethroned the Comets. The Scots would go on to their own streak of three straight titles in 1981, 1982 and 1983 – but as you know Alma College dropped its wrestling program in 1984. In Alma’s absence, Olivet went on to be a Top 25 national program in many years, and a Top 10 threat in its best seasons, all the way to a new millennium. Fast forward to 2011 when Alma College announces the return of wrestling to its campus. Not only do the Scots bring back the greatest sport on the planet, but they hire a man who most recently served as head wrestling coach and then vice president at Olivet College. Do you smell a potential rivalry? “People asked when I took the job if there was already a rivalry,” says Alma head coach Todd Hibbs. “My comment was that one might develop, but that it had nothing to do with me, and it wasn’t even possible until our Scot program did something special.” And then they did something special. Oh, did they ever. After dropping a 49-0 drubbing to the Comets in Hibbs’ first year at Alma, not many anywhere could predict what was to come in Olivet’s first visit to Alma a year later. Serving as host to the #9 Comets in February 2013, an unranked group of Scot freshman and sophomores welcomed the proposition of erasing the 49-0 score from memory. “I remember for weeks leading up to the match, Jamie Jakes kept running around our wrestling room quoting William Wallace and screaming to his teammates that we were going to ‘shock the nation’, said assistant coach Jeremiah Tobias. And then it happened. The Scots posted one of the greatest surprise performances in recent NCAA Division III wrestling memory. The word epic gets thrown around a lot these days. But really, this was truly epic. In a dual meet that saw overtimes, last-second takedowns and a heavyweight bout decided by riding-time, the teams scored the minimum points possible and knotted themselves at 15-15. However, NCAA rules don’t allow for wrestling duals to end in ties. Thus, a winner had to be determined on criteria. And Hibbs, a member of the NCAA Rules Committee, already had a smile on his face. “I had begun calculating the criteria as far back as 174,” said Hibbs. “When we won the heavyweight match, I knew what had just happened. But I didn’t tell anyone. It allowed me to look around the room and really soak it in when the announcement came.” For the determining criteria, the NCAA called for the points from all 10 varsity matches to be totaled. And when they were, the Scots held a 52-48 advantage – by rule, giving Alma a 16-15 victory. “The guys, their parents and our staff erupted when the announcer shared the news,” said Tobias. “Jamie was right, we shocked the nation – at least the Division III wrestling nation.” The Scots had done that something special. Now it was to be a rivalry. “Last year changed everything,” said Hibbs. “I can’t tell you how many texts, emails and phone calls I got. It was actually funny how some of my very best friends wondered if it was a misprint. You know, what kind of a friend is that!” joked Hibbs. But indeed, the upset changed the landscape for the new wrestling program at Alma. “People don’t consider us ‘new’ after that,” added Tobias. “Now we’re only in year three, so we don’t even have seniors yet this year. But it doesn’t matter. The expectations in our program all changed on that night, and that’s just fine.” The teams see one another quite often, with as many as eight common dates on their schedule, but the annual dual meet is different. This night can propel an entire year of chatter – even among friends. “I consider Brandon Brissette (OC head coach), Jeff Therrian (OC asst coach) and Adam Wilson (former OC wrestler for both Hibbs & Brissette) to be among the best friends I have in this sport,” commented Hibbs. “I think they would agree that it would be great to grab a drink together after the match – except it won’t happen. One of us isn't going to be in the mood.” And the other is sure to understand. Preceding Friday's big match at Olivet, state wrestling powers Lowell and Richmond will wrestle a dual at 5 p.m. Then the Scots and Comets will battle at 7:30 p.m. Friday’s match will feature Alma for the first time as a ranked program in the rivalry, at #25. The Comets enter the same as last year, at #9. Of the 20 varsity wrestlers who step on the mat Friday, 16 of them have been mentioned in the national rankings at some point this season. Let's just say it. It is going to be - epic.