What Does Penn State's Loss to Minnesota Mean? 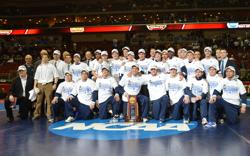 Minnesota will take over the top spot in the NCAA’s dual meet rankings, but everyone involved with the sport still knows that Penn State is the team to beat in the NCAA tournament.

With Ed Ruth (184) and David Taylor (165) heavily favored to run the table at NCAAs and Nico Megaludis, Zain Retherford, Matt Brown and both Altons expected to be high on the podium, only a string of upsets will prevent the Nittany Lions from earning their 4th straight team championship.

Minnesota expects All-American finishes from David Thorn, Dylan Ness, Scott Schiller, Tony Nelson, Logan Storley, Kevin Steinhaus and the Dardanes brothers, but none of those eight are favorites to win an individual title. Keep in mind that Minnesota also struggled in their last major tournament, the Southern Scuffle, finishing in third place (behind Penn State and Oklahoma State).

It’ll be difficult for any team to catch Penn State if Ruth and Taylor stay dominant. These two wrestlers can only earn the Nittany Lions six points each in a dual meet setting, but at a Tournament Ruth and Taylor alone could account for 62 team points (assuming pins of each of their 5 opponents on the way to a championship). The 62 points from those two wrestlers alone would have placed Penn State 6th at the 2013 NCAA Tournament; so when you factor in Penn State’s other All-Americans, Ruth and Taylor’s dominance will make PSU hard to catch.

This dual win for Minnesota could, however, have some far-reaching individual consequences; depending, of course, on what happens in the Big 10 Tournament.

Retherford’s win could slide Chris Dardanes into a slightly lower seed at NCAAs, though after the dust settles at the Big 10 Championships it’s unlikely that anyone will point back to Dardanes’ loss to Retherford as a key factor in his NCAA seeding.

Nick Dardanes looked beatable against Beitz, but he did get the win and likely won’t be hurt by his lackluster performance. That said, the referees may see some effect from this match as many fans are upset about the late ‘fleeing the mat’ call against Beitz that sent the bout to overtime.

Ness’ pin at 157 will hurt Dylan Alton’s seed at NCAAs and will have a big impact on Big 10 seeding, ultimately impacting where both wrestlers are seeded at NCAAs.

Storley’s win over Brown will certainly shake up Big 10 and NCAA seeding. We’ll have to see where the chips fall after what should be an exciting Big 10 Tourney at 174!

McIntosh’s win over Schiller will have a profound impact on Big 10 and NCAA seeding as Schiller is no longer the “obvious” #1 seed.  The Big 12 tournament will also have plenty to say about seeding at 197, with Gadsen (Iowa St) likely to face Rutt (Oklahoma).

Some seeds and rankings may change, but don’t be fooled; Penn State is still the team to beat at the NCAA and Big Ten Tournaments in March. Don’t count out Minnesota, Iowa, Oklahoma State, Cornell and others, but if the Nittany Lions perform to their potential it’ll be very difficult for anyone to keep pace.