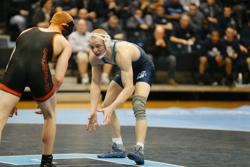 OKLAHOMA CITY, OK – The highs of a huge win can turn to the frustrations of a disappointing loss in the matter of hours at the NCAA Division I Wrestling Championships.

That's what happened to a pair of wrestlers with Michigan roots Thursday during the first round of this year's tournament, which is being held at the Chesapeake Arena in Oklahoma City.

But during Thursday evening's second round, Germiane lost to 10th seeded David Terao of American University 13-11, while Frisch lost to Mitchell Minotti of Lehigh, the 15th seed, 8-1.

“I'm not happy at all,” said Germaine, who was making his second trip to the finals. “I have to wrestle a lot better, and take advantage of opportunities.”

Germaine had his opportunities against Terao, but two questionable calls and a failed 'cow catcher' throw saw him wrestling from behind most of the match.

“He got me tired,” Germaine said. “We were in a lot of good scrambles and those get you tired. But I have to get to my offense better than I did.”

Germaine was in great position to become Eastern Michigan's first All American in 15 years, but is now dropped to the consolation bracket, and has his work cut out for him to get on to the podium stand.

“I just need to keep wrestling hard,” Germaine said. “I just have to win.”
Getting on the podium stand is all that matters for Frisch now. The huge win over Dardanes is a distant memory for him now.

“I don't feel too great right now,” said Frisch, who was also making his second trip to the finals. “I didn't wrestle that great of a match (against Minotti). I need to get back to what I was doing right.”

Which was wrestling better on his feet. He took Dardanes down twice, but did not secure a takedown against Minotti.