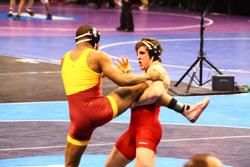 OKLAHOMA CITY, OK – Gabe Dean admitted that he didn't get a lot of sleep Wednesday night.

Who could blame him!

The Cornell freshman wrestler was about to wrestle in his first NCAA Division I Wrestling Championships this weekend at Chesapeake Arena in Oklahoma City.

That would be enough to cause a sudden awakening or two throughout the night, but Dean has more to deal with than most freshman making their first trip to the finals.

Many freshman have wrestled in this tournament,and have done well, but most head into their first finals a bit under the radar, looking to get their feet wet and see what the big stage is like.

Dean isn't your average freshman, as he comes into this tournament as the third seed at 184 pounds with an impressive 36-2 record.

And one of those wins on that record came against two-time defending champion in the weight class, Penn State's Ed Ruth.

That win in early January at the Southern Scuffle in Chattanooga, Tenn., also stopped an 84-match winning streak by Ruth.

But after a solid first day, a day in which saw him beat Iowa State's Lelund Weatherspoon by major decision and Michigan State's John Rizgallah by decision to put him into the quarterfinals Friday morning against Boise State's Jacob Swartz.

Just one match away from a possible rematch with Ruth, and three wins away from a national championship.

That's good, because day two looks a lot tougher than day one.

One of his two losses came to Ruth early in the season – by pin in one of Ruth's powerful cradles.

And he did wrestle Swartz before.

“He beat Swartz, but that was in overtime at Las Vegas,” Cornell assistant coach Damion Hahn said. “I think right now he has as good as chance as any, but he knows he has to take these one match at a time.”

“For the most part, I'm happy with day one,” he added. “I would have liked to get a major in that last match, but it was a good first day.”

And a good first day for his Big Red 125-pound sophomore Nashon Garrett and 157-pound freshman Brian Realbuto are also in the quarterfinals.

Hahn is happy for all three, and is ready to see what Dean, Garrett and Realbuto all do on Friday.

“It was a good first day,” Hahn said. “But what Gabe can attest to, is that you can always improve. That is the best thing about Gabe, he is always looking to improve on his past match.”