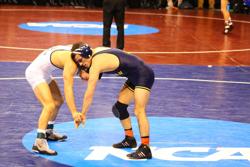 Youtsey in round 1 against Anthony Zanetta of Pitt. Photo/Boris Veysman, Associated Wrestling Press.

OKLAHOMA CITY, OK – The line between making it on top of the podium as an All American or leaving the NCAA Division I Wrestling Championships disappointed can be a fine one.

The skill sets of most of the wrestlers that make their way to the finals are very even, so that puts an emphasis on what happens between a wrestler's ears before every match even that much more important.

Youtsey went 1-2 during his first trip to the finals, and left wondering what it he was more prepared mentally to deal with the atmosphere and pressure.

“I truly believe that I train harder and I'm better than the guys I wrestled, I just have to take that on the mat,” said Youtsey, who finished his year with a 20-13 record. “My coaches say I have to believe in myself.”

It can't be the big stage, Youtsey's high school career begs to differ with that. The former Mason High School star was a three-time state champion, FloNationals champion and Fargo All American.

So he is use to succeeding when the sport's lights are their brightest.

“I wish I could tell you,” Youtsey said. “I know what it feels like to wrestle on the big stage and win.”

Youtsey opened his tournament by losing by pin to Anthony Zanetta of Pitt in 3 minutes, 44 seconds during Thursday morning's first round.

He did come back Thursday evening and pinned Jamie Franco of Hofstra in the first period. But followed that up with a 10-6 loss to Virginia Tech's Joey Dance on Friday morning.

That will have to come during the offseason now.

“This sucks, because it is such a long season with a lot of work, and to come here and not do your best, that sucks,” Youtsey said. “Not to believe in myself and not wrestle my match, that's difficult.
​
“I will be better next year,'” he added. “My coaches are great, and they help me – coach  Pritzlaff is always talking with me and working with me. I know I have the skills, now I just need to put everything together.”