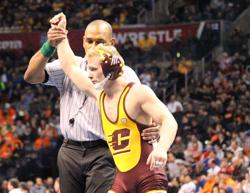 OKLAHOMA CITY, OK – There may have been some doubts this year that the All American streak on the Central Michigan University wrestling team would have halted at 11.

After all, the Chippewas were young and struggled throughout the year with consistency, both as a team and individually.

But leave it to a senior keep a streak alive.

Senior Joe Roth made it 12 straight years at least one Chippewa walks away from t he NCAA Division I Wrestling Championships as an All American.

Roth, a 133-pounder, did that by placing seventh at this year's finals, which were held at Chesapeake Energy Arena in Oklahoma City.

Roth was one of five Chippewas to make the trip to Oklahoma.

“I didn't feel a lot of pressure (to keep the streak alive),” Roth said. “For me, it is exciting to see all the work pay off. That was important, to have something to show for the weekend.”

Roth had a long weekend to accomplish All American status.

After winning his first-round match, Roth was beat by Wisconsin's Tyler Graff in round two. That bumped him down to the consolation bracket.

From there, he won three straight matches, twice beating wrestlers who were higher seeds that his 12th seed.

He did lose to Lehigh's Mason Beckman in his fourth match in the consolation bracket, but came back to beat 13 seed Cody Brewer 8-6 in the seventh-place match.

“He had to beat some tough guys to pull this off,” Central Michigan coach Tom Borelli said. “We did have some struggles this year, and didn't have any consistency, but the guys we brought down here believed in this program, and especially Joe. We know we have the program capable (to have 12 straight All Americans).”

Now looking to keep the streak alive next year, if not have even more All Americans in 2015.

“I'm really excited with the direction the program is heading,” Borelli said. 'We still may have some struggles next because we will have some young guys in the lineup. But I am excited with some of the recruits coming

Some of those recruits are Cody LeCount of Indiana, Brent Fleetwood of Delaware and Justin Oliver of Davison.

And Borelli acknowledges that the additions of Missouri, Northern Iowa and Old Dominion into the Mid-American Conference can only help recruiting even more in the future.

“In our state (of Michigan), when you recruit, they guys have dreams of wrestling in the Big Ten,” Borelli said. “But now to have Missouri, Northern Iowa and Old Dominion in the league, that can only help. Some kids I talk to don't even know that Missouri is in our conference.”