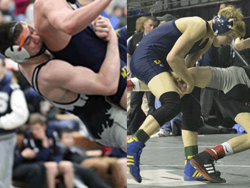 The 3-day Cadet Freestyle National Tournament will conclude this afternoon in the FargoDome with a pair of Michigan wrestlers competing on the big stage for national titles.

Walled Lake Central freshman Ben Freeman has had a ton of freestyle/greco success over the last two years, but this will be his first time wrestling in the Fargo finals.  Freeman has been somewhat untested thus far with 2 tech-falls, a forfeit, an 18-9 decision and a 9-0 decision in the semifinals.  He will face his biggest challenge, however, wrestling Austin Gomez of IL in the 113lb finals who beat him in the Greco tournament a few days ago and also beat him at the Cadet Duals last month.

Brighton sophomore Luke Ready has been on fire with 4 straight technical falls to advance to the championship finals.  Ready has beaten Wisconsin and Missouri state placers thus far, however, will face his toughest challenge yet with Iowa State Placer and nationally ranked Gannon Gremmel in the 220lb finals.

The finals are set to get going at 3:00 EST and will be streamed live on FloWrestling through their premium "FloPro" service.

The only other Michigander wrestling in the final round will be Kanen Storr at 120lbs wrestling for 3rd.  Wyatt Harden earned double all-american status at 195lbs, but will be defaulting in his final match after suffering a shoulder injury in the semifinals.

Check back for a full recap.

Rankings rolling out this week!! D1 and D2 up now - D3 and D4 coming tomorrow and Thursday!! https://t.co/HKqDbZNMqH https://t.co/Dw0GLq3fMV