East Lansing, MI - Heading into his 25th season, Coach MINKEL finds himself in unfamiliar waters. For only the second time in his head coaching career, and the first time since 2004 (Nick SIMMONS’ Olympic Redshirt year), Minkel does not have a returning NCAA qualifier. I think it’s safe to say, we are going to learn a lot about Minkel, as this leaves a huge hole on the team for something he can’t coach, and that’s leadership.

Where are the Spartans going to find leadership?

The lower weights of the Spartans have been historically good, and I expect this is where they are going to look to find some leadership. Coming off a “growing” season, Mitch ROGALINER looks to improve on his 17-13 record from 2014-15. Besides John RIZQALLAH in 2014-15, if there was an individual who the Spartans were hopeful would get an invite to the national tournament, it would have been Rogaliner. We saw flashes of how good Rogaliner really is during the Ohio State dual last season, but he has yet to put SEVEN tough minutes together. His ability to get to this dump makes makes him a good wrestler. His ability to finish that dump is going to make him a great wrestler.

Another POTENTIAL bright spot in the Spartan line-up is at 133 pounds, where Javier GASCA looks to make his return. Gasca was able to pick up some very notable wins last season at 133 pounds before running into some weight issues. Gasca finished the season at 141 pounds, going 0-2 at the Big Ten Championships. Although Gasca had a rough end to the season, he has what it takes to be a top tier wrestler in the Big Ten. He not only rides well, but also gets turns on top, and that is what is going to help separate him this season. IF he can stay healthy and IF he is committed to keeping his weight under control, look for Gasca to be one of those leaders that the Spartans are desperately looking for.

The recent departure of Hermilo ESQUIVEL, for undisclosed reasons, leaves the Spartans with limited options in the lower weights. Last season, we saw some flexibility in the line-up at 133/141 pounds, but it doesn't look like we’ll see that this season. Garth YENTER will now have his starting spot solidified and is going to benefit in ways HE doesn't even know. Last year, the constant thought of losing his starting spot to Esquivel weighed on him. Now, with that pressure off his shoulders, you're going to see a more open, offensive Yenter. He has shown promises in the duals that he has started, but the inability to finish shots cost him several matches. It’s promising that he’s is getting to the legs, but that’s only half the battle. The other half is finishing it. Hopefully he worked on it during the offseason, because starting out with a one-two-three punch (Rogaliner, Gasca and Yenter), could mean good news for the Spartans.

The Spartans kick off the 2015-16 season at the Eastern Michigan Duals/Open. Excluding those who are redshirting, Michigan State will wrestle duals v. Utah Valley, Ohio and Clarion, before heading home for the MSU Open (11/15/2015). To finish off November, the Spartans will host their first dual of the season v. Eastern Michigan, which is a very winnable dual for this young team.

December/January is when the uphill battle begins for the Spartans, as they start by traveling to compete against their in-state rivals, Central Michigan and The University of Michigan. Shortly after the holiday break, MSU will travel to Chattanooga for the first time to wrestle in one of the toughest tournaments in the country, the Southern Scuffle. Michigan State HAS to take advantage of the opportunity to gain valuable experience in these hostile environments before heading into the heart of the Big Ten season.

Tom Minkel and the Spartans have a very favorable Big Ten home schedule, as they welcome Purdue, Indiana, Illinois and Northwestern to East Lansing. But before he says his final good byes at Jension Field House on 1/31/2016 v. the Northwestern Wildcats, Coach Minkel and the Spartans travel to some unforgiving environments. A lot will be learned about the MSU Spartans as they travel to Rutgers, Ohio State (Walsh Jesuit) and Penn State for their away duals.

Where can the Spartan improve?

The lack of production during Big Ten action has really hindered their ability to get to the NCAA tournament. MSU needs to take advantage of wrestling outside of the Big Ten. Their lack of postseason production in recent years can be closely tied with the seedings at the conference tournament. It’s easy to write, and sounds cliche, but the Spartans HAVE to win Big Ten matches. Their inability to compete at a high level during the regular season hurts them when post season seedings come around. There is no crazy stats here, it’s simple, if they don't produce during the regular season, they don't get seeded. If they don't get seeded, they wrestle one of the high seeds in the first round.

Roger WILDMO showed promise early in his career, but has not been able to get to his offense in the past two years. If he finds his confidence, he can be dangerous come March. Keep an eye on the SHADAIA twins at 174/184 pounds. We didn't see them too much from them last season, so we don't have to much to go on other than "they look good." 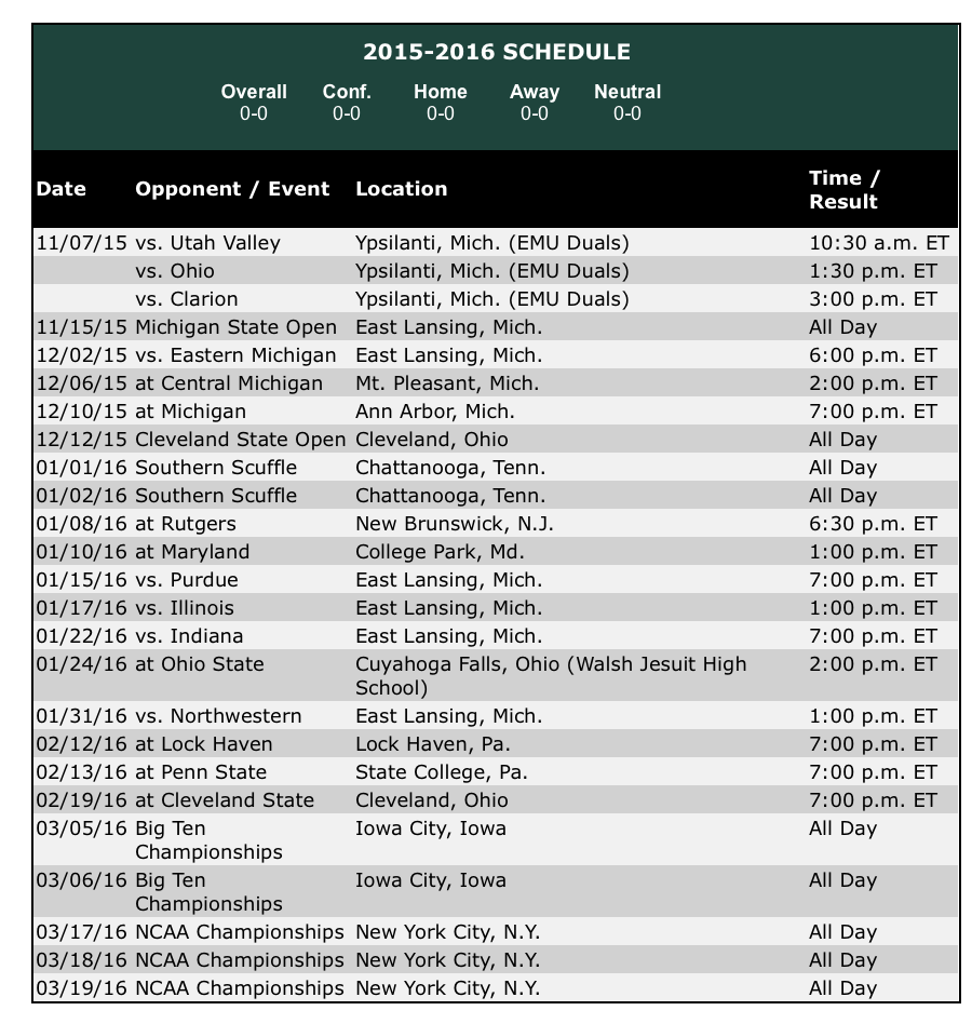