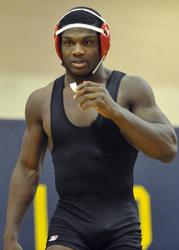 Jelani Embree of Warren Lincoln, MI announced via social media today that he has committed to the University of Michigan.

Embree, a junior, is arguably the top recruit in the state of Michigan's class of 2017.  He won the Division 2 State title this year and has already shined on the national scene.  He won the UWW Cadet Freestyle National Title last spring and was FloNational Runner-Up this spring.

Embree, who projects at 174lbs for the Wolverines, joins the other top in-state recruit 3x State Champ Ben Freeman, who committed to the Wolverines earlier this year, giving The University of Michigan both of the top 2 class of 2017 recruits out of the state of Michigan.