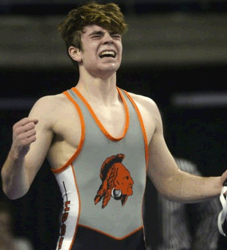 A pair of Michigan's top 10 senior wrestlers have gone off the board in the last week as 2x State Champ Trent Hillger (#3) of Lake Fenton announced today that he will be wrestling at the University of Wisconsin and D2 State Champ Drew Marten (#8) of Tecumseh committed to Central Michigan over the weekend.

Hillger is currently ranked #4 in the country at 285lbs by FloWrestling and is the top ranked senior in the weight class.  He is the first Michigander to wrestle at Wisconsin in a long time, at least in the Michigan Grappler era (last 10 years).

Marten won the D2 State Title last year and is a top 100 recruit in the country by InterMat.  He follows another Tecumseh State Champ Landon Pelham to Mt Pleasant.  Pelham is a freshman for the Chippewas.

Click here to see all the top senior recruits in Michigan and where they have committed.

I'm excited to announce that I will be continuing my academic and wrestling career at the University of Wisconsin! Go Badgers! pic.twitter.com/IofCGQSbAh

Excited to announce my commitment to continue my studies and pursue a Division 1 NCAA title at Central Michigan University! #FireupChips pic.twitter.com/UDI3DSmFfa