Coming off of a freshman campaign that saw a seventh-place finish at NCAA's, CMU's sophomore Justin Oliver gave some insight on his historic run last season. From second string, to All-American, to AWN's All-Rookie Team, Oliver says he's looking to "compete at a higher level this season." 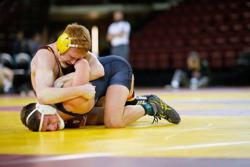 MiGrappler: Coming into last season, and furthermore, after the Michigan State Open, you were number two on the depth chart behind a guy who was top ten in the country, Colin Heffernan. Heffernan beats you at the MSU Open. Take me through that drive home from East Lansing to Mt. Pleasant?

MiGrappler: Fast forward to mid-season when Heffernan gets hurt. You came into the starting line-up and went on a nine match win streak in dual competition. At what point did you really get comfortable enough to go out and wrestle and not worry about losing your starting spot?

JO: At the Southern Scuffle, it was still Heffernan’s spot, so it felt like I had nothing to lose. My main focus was going out and wrestling freely. A couple weeks later, we wrestled Oregon State and Ohio. In winning both of those matches, I realized something important. I realized that I was able to wrestle at a higher level. I didn’t have to slow these matches down. I could just go out and put points on the board. That’s when I really felt that I wasn’t questioning myself anymore, after those two duals.

MiGrappler: The loss to DePalma (Kent State) in the MAC finals was one of your first losses in some time. What did you learn from that match?

JO: Well, I wrestled him at the Kent State Tri-Meet, so I knew what he was going to do on top. During that match, he didn’t try too much on his feet. In the dual, I ended up winning and I felt pretty good with how I wrestled. In the MAC finals, I started to get frustrated that I wasn’t scoring and I took a few shots that I shouldn’t have. That was the difference in those two matches.

MiGrappler: Mentally, where were you heading into NCAA’s?

JO: It was nervous excitement. I really looked to the upper classman for advice, Luke Smith in particular. He helped me out a lot later in the season. He was constantly in my ear telling me “it's your time.” Luke was a great leader, which helped me get in the right place mentally before heading into my NCAA Championships.

MiGrappler: Draws for NCAA's come out. You’re on the same side (top side) as Penn State’s Zain Retherford. What were your initials thoughts?

JO: I was focused on getting my first match out of the way. A lot of people didn’t think I would even make it to Zain. For the Retherford match, I wanted to push the pace and look forward to the third period because I knew he hadn't been there a lot. I was a little bit nervous, but looking back now, I think I could have competed a lot better than I did.

MiGrappler:  What did you learn from that match with Retherford?

JO: In order to bridge the gap, I needed to work on the mat. I thought about that match a lot throughout the off season, which is why I worked on top and bottom so much.

MiGrappler: You’re an All-American as a freshman, but some adjustments will need to be made to make it to Saturday night’s big stage in St. Louis. What are those adjustments?

JO: I need to be able to wrestle more composed on my feet. In the MAC finals with DePalma, I got flustered because I wasn’t getting to my offense and I gave up points. I cannot do that this season. I learned I need balance. Also, I only had four pins last season so I’m looking for more this season!

MiGrappler: From last year to this year, how is your mindset different?

JO: Coming into this season, I feel more confident. There was still doubt last season coming off a redshirt year. Becoming an All-American and knowing what I worked on, I'm positive I can compete at a higher level this season.

MiGrappler: Is there one individual you wrestled last season that you'd like to wrestle this season?